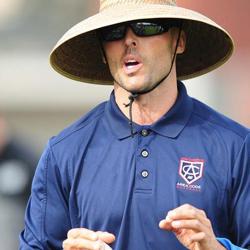 Coach Trosky was the head coach of Monterey Peninsula College and coached with the German, Croatian, and South African National teams. He coached professionally in Europe and in three American Minor Leagues. In the German Bundesliga, he won a National Championship as Head Coach of the Cologne Dodgers and was named Germany’s Baseball Coach of the Year. Annually, Coach Trosky coaches in the Dominican Republic with some of the top baseball academies. Coach Trosky is known as one of the top Infield Instructors in the world. He is a national speaker and radio analyst, hosting the weekly XM Radio show “CPD” Complete Player Development, “BTM” Body Tools Makeup; a branch of the Trosky Ranch - 6th Tool Nation! Coach Trosky is co-owner of the Trosky Ranch, a player development company dedicated to providing navigation to aspiring student athletes and coaches. Coach Trosky received All-American and Scholar Athlete awards in college and holds a Masters-Degree in Christian Leadership / Youth Family Development. His baseball endeavors have taken him to nearly all 50 states as well as around the world; coaching in South Africa, Japan, China, Canada, Dominican Republic, Mexico, Hawaii, Germany, Italy, Belgium, Holland, Croatia, and the Czech Republic.

Coach Trosky believes greatness lies within everyone, and it is our responsibility to bring it out. Let’s GO!

The Trosky lineage is filled with baseball professionals, with the majority being born and bred in the great state of Iowa. Four of the family professionals come from the small farm town of Norway, Iowa. Known as the baseball capital, Norway has bred more professional baseball players per capita than any other US city or town. Within the Trosky family lineage, there are a total of 4 major leaguers and 4 minor leaguers. The most prominent major leaguer is Hal Trosky, the greatest rookie in baseball history. In 1934, during Trosky’s rookie season with the Cleveland Indians, he drove in 137 RBI’s, hit 35 home runs, and batted .333. In 1936 he was placed on the cover of Wheaties Cereal for leading the American league with 162 RBI’S, batting .343, while hitting 42 home runs. The Trosky bloodline has done something few families have done, claiming 3 generations to one major league organization (Chicago White Sox). Grandpa Hal finished his 11th season with the Sox; Uncle Hal Trosky Jr. pitched in the big leagues for the Sox in 1958; and Cousin Collin Mattiace (drafted by the Toronto Blue Jays) was the Sox big league Physical Therapist, earning a World Series ring in 2003. The other family professionals are former major league standout pitcher cousin Mike Boddiker. In 1984, Boddiker lead the AL with 20 wins and with a 2.79 ERA. Cousin Nate Freeze, a 5-year high school varsity starter played SS in AAA for the Chicago Cubs. Cousin Ian Mattiace was one of the greatest high school players in Iowa’s history, hitting 23 homeruns and 69 RBI’s in a 23 game high school season. Mattiace signed a minor league contract with the Amarillo, Armadillos. Uncle Mick Mattiace pitched AAA with the Cincinnati Reds and was one of 4 pitchers in baseball history to throw back-to-back no hitters. And the eighth family professional is coach Nate Trosky. After coaching 2 years in the United States minor league system, Nate spent 4 years as a player coach in Europe’s professional leagues, winning the German World Series in 1998. Nate has been employed by MLB as a part-time scout since 2007.